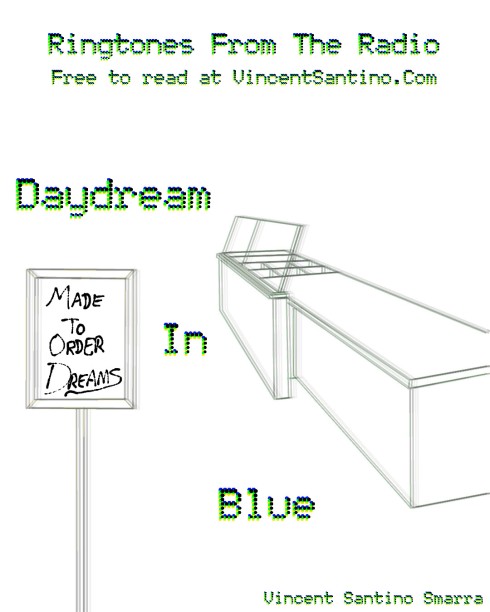 I Monster – Daydream In Blue

A bus pulls up to a rainbow painted shop in the center of a grey strip-mall. First out is a man with a whistle necklace and tired eyes – he sighs, steps aside for a bunch of kids to rush by. The youth knock over trash cans and use their breath to doodle on dark windows. Last off is a lady, too busy with her phone to look as she says something out of the side of her mouth to the man.

The whistle tears the air and all the kids come running back. One is late, was tying his shoe – the only spot left is in front of the line. The man and woman open colorful doors for the children to march through.

The single worker inside grimaces at the sight of them. He wants to spit on each buffet-style ingredient, break the separating glass then attack them with see-through shrapnel but can’t – the woman is in his face pointing to a number on her phone. Whistle-man counts the kids, who, enraptured by the menu, are still. Young is old enough to know normal, and the shop ain’t it; ‘made to order dreams’ is a new phrase to them.

The ingredients, from ambition to zizz, are alphabetized down the line. Courage is dirt brown and chunky, fear a runny, purplish goo…The employee replenishes the empties and pulls a fresh serving spoon from boiling water.

First in line steps up with world-sized eyes. He touches the glass to point out what he wants, leaves fingerprints everywhere. The employee has to two-hand the scoop then jump to force all that’s been ordered into a container. The dream is slop, exactly what the kid wanted –

Jabs a finger at her phone.

The employee avoids the child’s eyes as he slides the too-expensive order into a trash-can.

The thud shakes the boy, who wants to cry but the others would laugh, and wants to run but the whistle would bring him back – the employee, moving fast, gets a fresh container, spoon, and this time without asking for preference makes another, simple, dream for the kid.

First in line does not take what is offered until the man’s hand on shoulder orders that it be so; the child is also told to wait for the others to start. The rest receive the same as the first, the only responsibility they have is to pick up their ‘order’ at the register, and they do.

Now they all have treats; they’re allowed to eat. Some cry as it goes down, others have problems keeping it there, but through sheer obedience, all the children swallow what they did not ask for.

The woman wiggles her phone at the man. He, by the door, goes to blow the whistle but it isn’t necessary; the children have already fallen in line.

Continue reading Ringtones From The Radio – Novocaine For The Soul