Summary: The story of an invention that gives opposite sides of a dispute the chance to settle issues through a shared dream scenario. Though this book does not lack a protagonist the story exists for its concept. It makes sense that, fiction or not, a book published in an era so known for its protests for peace would be about a non-violent way to resolve all conflicts.  The Dueling Machine provides a digital battleground of the challenger’s choice where arguments are won by one person eliminating the other (1v1 on Rust anyone?), it works as the perfect precursor of our beloved video games. I doubt Bova meant to pull a Nostradamus but he had to at least  been looking the way society was headed to be able to so accurately depict its direction. The focus on games and showmanship, while a war that’s been boiling for centuries finally bubbles over in the background, is solid but the characters’ feelings about the issue feels forced; its never given proper time or attention so its just a story in a story that I didn’t care nearly as much about as I did the Dueling Machine. Plus, the way things play out at the end is too weak for me to believe for me there was ever an explosive conflict to begin with – the plot is a Fahrenheit 451 clone crafted by someone with slightly less written grace.

Though I do not hesitate to list this book alongside a great, that is only when speaking of plot construction; the characters that populate these pages are almost as thin as the paper they’re printed on. The attempts made to flesh them out are trivial when held against the conceptual heights, the people of the story are one-trick ponies in a top-tier circus that do an adequate job of distracting the reader until the main attraction pops back up. The writing is calm and clear throughout the narrative, Bova’s diction makes actions unfold rather than fall into place. This is more of a relaxing read than an exciting one; the book is not without its lulls but, at the end, I felt that the patience necessary to make it through was well worth the reward.

What kept me reading: The creative approach to familiar subjects. As the book progresses the inventor of the machine becomes a frequent dueler, and because he is a seasoned professor/professional intellectual the battlegrounds he chooses are far from traditional sword and shield affairs. I won’t spoil what I considered to be the best parts, but will say that I never expected to enjoy writing about physics.

Recommended for: Fans of science fiction 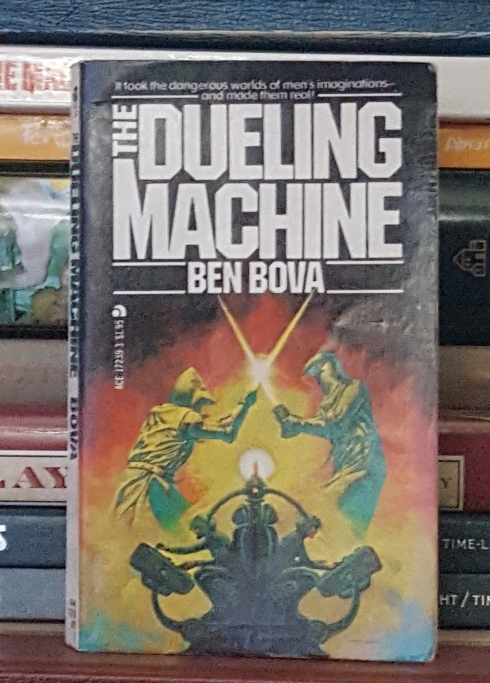 One thought on “Review: The Dueling Machine”