Lynn concerned herself with empathy, love, and care.

The idealistic and therefore unrealistic conception of good she had in her mind made her spend her energy restoring the same few souls over and over again, but no matter what she did it was never enough. She was born into sainthood, indiscriminately spread happiness with discipline so intense that it often crossed into flagellism. She did her best to ignore the constant company of anguish and inadequacy but it was they, her demons, that motivated her to complete every move.

She was not aware because she did not ever think that in-depth about herself. Some days she dismissed any urge to do so as selfish, others she’d settle on frivolous. She was always focused on the world; as a youth, she executed a hunger-strike when her parents set whiskey traps for slugs in the garden. In middle school, she started a crochet club that donated everything it made to local homeless shelters. She was not prideful, just acutely aware of her desire to be good. She figured her destiny to be in the medical field.

Throughout higher education she never lost sight of her goal, maintained grades and morality, but doing as she pleased made her feel selfish. In her mind, she was failing to meet the minimum level of helpfulness she’d come to expect from herself. Being on the path to good meant nothing to who she was at that moment, without current evidence to prove herself to herself, Lynn anguished, and was convinced that the muscles she’d spent a lifetime developing had atrophied.

She tortured herself trying to think of ways to help more people but could only ever think of what she’d done, which already was not enough.
One day, while crocheting on the bus home from class, the worry hit in Lynn hit a critical point. Her hands kept moving, for her and all other crochet enthusiasts, the process becomes automatic almost immediately after being learned, but her mind was no longer in tune with her soul.

Her self-deprecation had compounded into an Other inside of her head, constantly her peace of mind. There was not a losing battle for her to fight, it was a one-sided affair, a slaughter on all accounts.

Lynn did not see the old woman dressed in shabby layers take the seat across from her. Nor did Lynn feel the first, second, or third prod of the woman’s bony finger against bouncing knee, but the fourth woke our hero from the nightmare of her introspection. “You okay honey?” The woman asked nicely before relaxing back into seat.

Lynn smiled to hide confusion. “Yes, why do you ask?” She asked while the aluminum hooks performed the crochet clink.

The woman chuckled. “‘Well, people typically use yarn for that sort of thing.” She nodded at Lynn’s hands.

Lynn looked down, then up, lips folded into a smile. “Thank you; I promise I’m not as insane as I seem right now.”

“No moreso than me.” The lady said – Lynn was not the type to judge but couldn’t help looking at the woman after a comment like that. Her skinny face hung out from thick body yet remained high, a Christmas tree decorated with a single, heavy ornament on top. Lynn rightfully assumed the woman’s thickness was because of her wearing all pieces of clothing at all times, a sign of not having a home to store them in. Atop the woman’s head sat a thick hat, obviously handmade because it’d frayed without ripping. Its age was apparent, colors faded, but still it held its shape – Lynn loved it and told the lady as much. “Thanks, a friend gave it to me a couple cities ago.”

“Not Pittsburgh was it?” Lynn asked jokingly as she wound yarn around hook.

Lynn thought the hat looked familiar but after that reply was sure she recognized it as one of her own creations she’d donated all those years ago. Since Lynn would’ve considered explaining herself a form of bragging, she settled for telling the woman she’d seen it around before. “Crazy small world.” The woman said and the two shared another smile.

Lynn resumed crocheting in a good mood – a few stops later she had a quarter of a hat done – once again she was so dialed in that she failed to notice the lady’s request for attention. “I swear I won’t tell a soul if you tell me how to do that.”

Lynn laughed, “It’s not a secret, all you need are some hooks and-”

“Not that,” The woman interrupted, “That.”

Unaware of what the lady referred to, Lynn looked to where bony finger pointed – on the right was a busted open window into another world where Lynn, in full doctor regalia, cured person after person of pain as they stepped up from a line stretching to infinity.

“I have no idea what’s happening.” Lynn managed to say. As they watched, the scene flickered, then was gone. “It stopped when your hands did – just keep doing that. Whatever it was.”

Lynn listened and the dream reappeared, her fantasy fascinated them both while the bus rode on.

After a while, the lady asked tentatively, “You think, maybe, if I told you what I wanted you’d be able to do the same thing?”

Lynn shrugged. “I can try.” After all, she thought, it’s a long way to the end of the line. 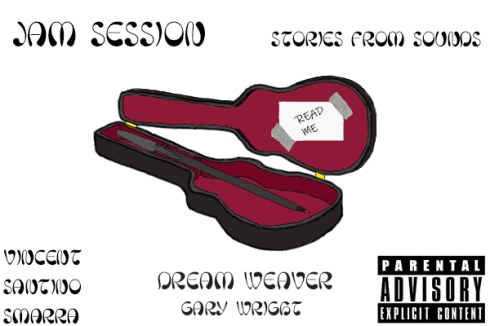