The Cars – Just What I Needed

Dollar store pen doodles on the bottom of my foot.

The memories that form my life won’t reduce, no doing away with this excess.

Spongebob was made for kids; I said as much upon learning of the plan. You do not go on a date to remind your partner of afterschool at their parent’s house. My complaint, though, was voiced too late, my friend and I were already on the way to pick up our dates. We were familiar with his but blind to mine, backing out at that moment would’ve sabotaged more than my own situation; girls don’t set up friends of guys they hate, so, at the least, I figured myself in for a night of obligated presence and participation.

They got into the backseat and She laughed at how we smelled, politely sat through my overly thorough explanation of our just thought of business idea that was ‘Chipotle, but like, for weed’ – the demands I’d expected never came.

Movies you don’t want to watch take forever to get through unless you’re not paying attention; we escaped in each other’s lips. During the previews She said that 3D glasses always gave her migraines, I figured it to be an excuse to turn toward me but over time I found out she had told the truth. She insisted watching those movies in 2D wasn’t so bad but I tried. It was.

Eventually, I realized I was dating my opposite, and it took time to get over the resultant revulsion; no one wants to accept that the person they are would not put up with the person they are. Initial thoughts on the matter left me sure that our differences would pile infinitely high – instead, each divide was as an independent idiosyncrasy, another opportunity to learn.

Compromise and surrender share the same importance as conflict. Communication is at the center of every concept we cling to.

I’d need more fingers than I have to count the number of times my venting left me empty but didn’t affect her, sometimes I’d be out of breath and she’d still smiling, waiting for more. It is then, in those quiet times, that she dares to make it known she is not devoid of desire.

If I try too hard to get her to talk my influence is identifiable as a scourge, she’ll always say something back to me but sometimes it seems like regurgitation, bile that left such a nasty taste in her mouth that she must continue to vomit until she’s out of breath except it doesn’t suit her like I guess(?) it does me.

I have no clue how She tolerates the things that I do; I can barely put up with an imitation.

But She is worth it. Genuine conversation never fails to emerge, to enthrall me with whatever idea as well as the depths from which it came. The combination of Granny Smith apples and gouda cheese was unfathomable to me, the shallow confines in which I operate affords no room for vain taste-testing. Me on my own would take a green apple out of someone’s fridge only because I’d been offered a red, and before Her all cheese was mold; however, biting the two together produces an immaculate sensation not worth resisting for the sake of it.

The more She revealed herself to me the more I became comfortable with things I never thought I would. It’s typical to jump after unexpected contact but She had me relaxed past the point of reflex; I was absolutely okay with the dulled point of a pen tickling its path across the bottom of my foot. Giggle, then the laugh was on, fast, furious, fun; all it takes is a reach and a click to arm myself – we attacked each other’s feet in silence then compared our works. She is a better artist than me; there was no meaning in the symbols she doodled but they looked as beautiful as they’d felt going on.

Like I said earlier, there’s no reducing the fractions that make up my life. All the same, I’m glad to have her, She is the common denominator helping me keep things simple. 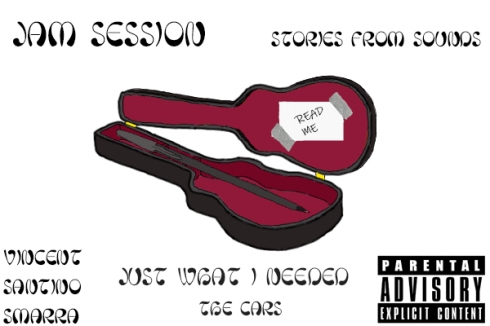 2 thoughts on “Jam Session: Just What I Needed”