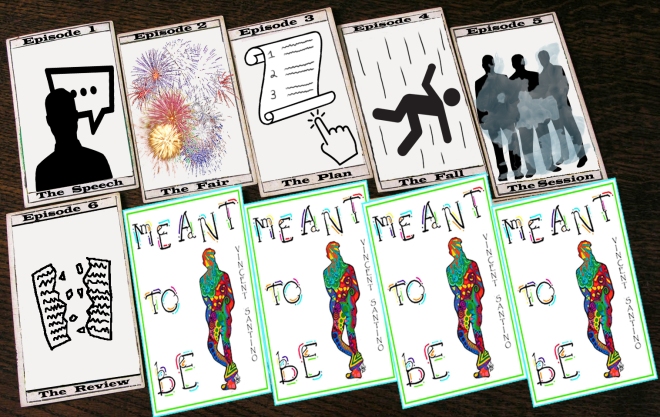 James had wanted to check what’d already been written; I’d been locked in my room since. “Don’t be dramatic Eddy.” Pam said before another bang on my door.

“Yeah,” James chimed in, his voice further away, “Neither one of us really care.” A slam at the end of that sentence, then, “The fuck, does your Mom hate you? Only snack in your fridge is bologna.”

I poked my head out to scream, “Sorry she didn’t have time to shop before reality shattered.” Pam used the opportunity to force her way past me, she was a lot stronger than I’d figured, then was in front of my computer.

“Dude.” She said, looked at me with an eyebrow raised higher than my disappointment; she’d been able to tell it was shit before even sitting down.

I don’t usually cry but it comes when it does; I took the flash of heat underneath my skin as an indication to run, and I did, out of my room, through hallway, past James digging into the little green left in his bag, into the night. I’ll take alone over pathetic every single time.

Summer nights get chilly, I wished I was fatter, or at least had thought to put on a coat; my legs pumped until my lungs ran out of air. Sweat appeared, ran down my face, into my eyes; the tears were already coming but that made things worse, I had to indulge- shuddered, screamed, felt sorry for myself-

Pam showed up mid-sniffle; I had no excuse, racked my brain for something-”You know why I always showed up to my dad’s shows early?”

Another sniff, she didn’t say a thing; what a friend. “No,” I used sleeve to wipe face, a breath to steady my voice, laughed, sat down in front of the nearest telephone pole then leaned into it. “I just figured you liked that he smoked up the sky.”

Pam chuckled, slid next to me. “Nah.

In the seconds before, when I look up and see all the stars, it occurs to me that around each of those are rocks as big as this one.” She slapped the cement, “Which means that somewhere out there, spinning just like us, is a space where none of this matters. Helps me relax and enjoy the show.”

“What’s that supposed to do for me?”

Pam’s eyes went to the ground; I waited, tapped out a rhythm, looked around- “There’s a difference between acknowledging our powerlessness and acting like a victim to it.” Her words were heavy in the air between us, I don’t think either one of us had expected them.

“WHERE’D YOU GUYS GO” James yelled from down the street; he must’ve seen us, I figured, because the red dot that’d moved with the words bounced, became brighter, then he was in front of us. “Either one of you want a hit?” He coughed and held out a stinger of a joint.

Pam stood but didn’t take it. “That’d burn me.”

James was borderline choking. “Open up your lungs you mouth breather, hands above your head.” I said as I got up too; he listened to me but swung his arms too fast, the wind pushed an ember straight from burning paper down his shirt. He danced, pranced, jumped into thumps trying to escape the pain; I almost fell back down laughing.

James brought his arms into sleeves, spun around his shirt to examine the new burn hole. “Why were you two even out here?”

I looked to the ground. “Just looking at the stars,” Pam said and started back towards the house; James and I followed. “And I was just telling Eddy that you and I should stay over; none of us know what’s going to happen next.”

It was the best night I had since the shit started.